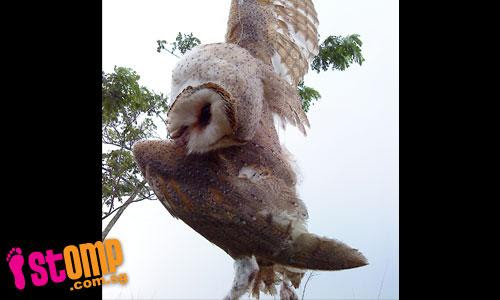 STOMPer Ernie spotted this poor owl left tangled up in a fishing line to die at Punggol Jetty. Anglers fishing nearby could have helped by calling the Police or SPCA, but they did nothing.

"Found this poor owl tangled and hanging by a tree near Punggol Jetty.

"I noticed something brown protuding from a tree and realised that it was actually a wing!

"My hubby went to check it out and found that it was a dead owl all tangled up in a fishing line.

"Sadly, some anglers did some fishing last few days and somehow the owl got tangled.

"Instead of calling the police or the SPCA, they left it to die on the tree."

It is very upsetting to see how the irresponsible actions of an angler have needlessly condemned a barn owl (Tyto alba) to what was probably a slow, agonising death.

The barn owl is a relatively common bird in Singapore. It is a bird of open habitats, and can be found in scrub and grasslands. The population in Singapore has increased since the late 20th century, due to an influx of owls dispersing from Peninsular Malaysia. 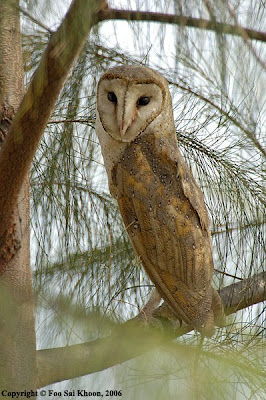 The barn owl is commonly regarded as one of the best forms of rodent control; studies have shown that a nesting pair and their chicks may consume as many as 1000 rats and mice in a year. In the oil palm plantations and rice fields of Peninsular Malaysia, barn owls are encouraged to breed with the help of nest boxes. In Israel, barn owls are being used as an environmentally-friendly alternative to pesticides. In Laos, where a plague of rats has devastated crops, proposals have been made to increase the barn owl population. 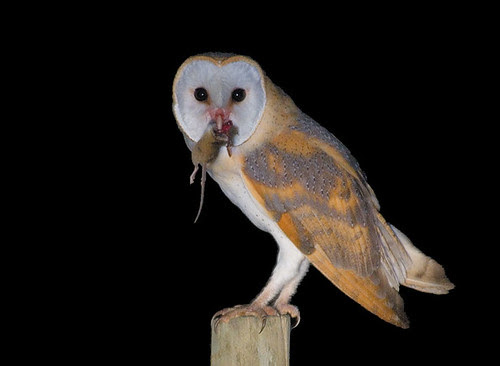 The barn owl has a very wide distribution, being found on every continent except Antarctica.

Global distribution of the barn owl;
(Image from Wikipedia)

Singapore's barn owls belong to the subspecies javanica, which is found in the Malay Peninsula, Sumatra, Java, and surrounding smaller islands. 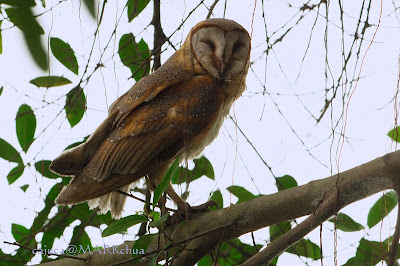 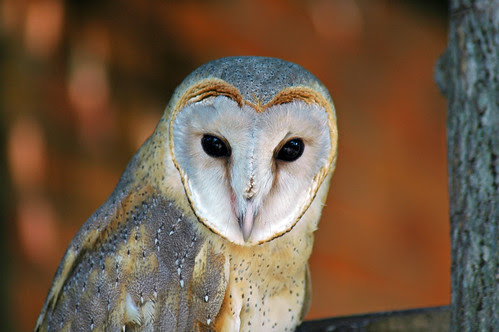 The barn owl is a very adaptable species; it favours the open fields created by agriculture, and while it nests in cavities, it often chooses to raise its young in man-made structures. This can include chimneys, attics, and church steeples. In fact, the common name for this species originates from the fact that in Europe, barn lofts were traditionally commonly selected as nesting sites. In Malaysia, barn owls are known to nest in the rafters of houses, while in Singapore, a pair chose to nest below the Benjamin Sheares Bridge for several years. 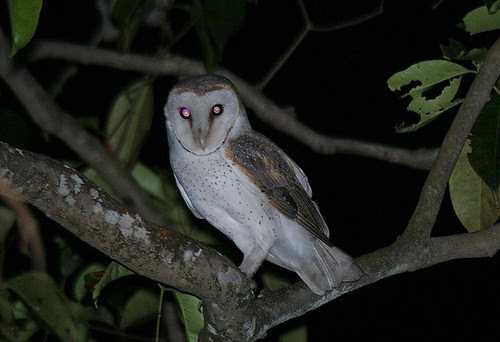 However, the use of rat poisons can pose a serious threat to barn owls, as they may inadvertently consume poisoned rodents. It is said that the barn owl population in Sentosa has greatly declined because of this. Also, because barn owls tend to fly close to the ground, they are at great risk of being struck by vehicles. 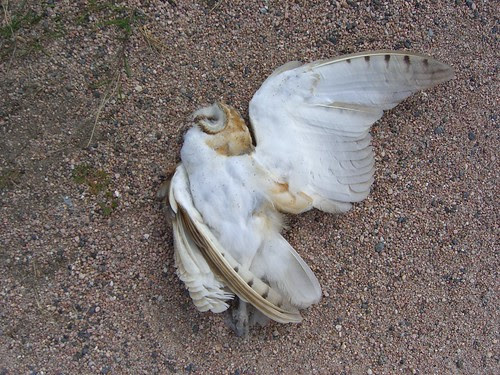 Loss of nesting sites is also a major threat to barn owls; the barn owl, formerly Britain's most common owl, is in decline there as changes in land use have led to barns being demolished or converted to other uses.

And in a bizarre (and disturbing) incident, 796 barn owls were found plucked and frozen in a wildlife raid in Malaysia late last year.

This is not the first case of a bird that has been killed by fishing line. Previous records include: 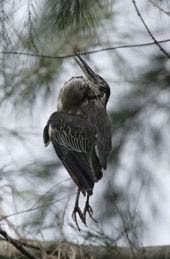 A little heron (Butorides striatus) at Punggol in February 2008; 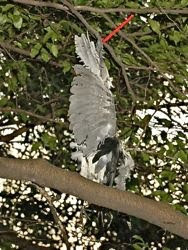 Another heron at West Coast Park in March 2008; 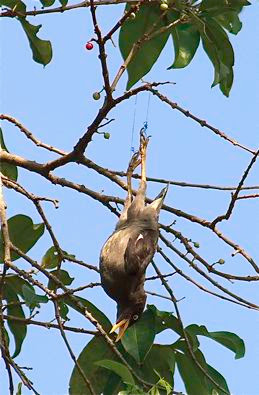 A Javan myna (Acridotheres javanicus) at Bidadari Cemetery in May 2009; 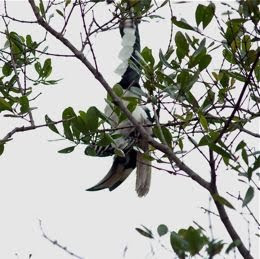 And even an Oriental pied hornbill (Anthracoceros albirostris) in June this year!

In 2007, a juvenile buffy fish owl (Ketupa ketupu) at Lower Peirce Reservoir got its feet entangled in some discarded fishing line, but managed to free itself.

Discarded fishing lines and nets are not just an eyesore, they do pose a very real threat to all sorts of creatures. Sessile animals such as sea fans and corals get snagged and even uprooted. Crabs and horseshoe crabs get entangled and are then left trapped and exposed to predators and the elements, while fishes work themselves into a frenzy trying to break free, only to die as the tide recedes. Larger creatures, from monitor lizards and turtles to birds, and even marine mammals such as seals and whales, are also at great risk from this scourge that plagues the world's oceans.

Anglers may bemoan loss and degradation of fishing grounds due to development and pollution, but how many of them are truly aware of how their own individuals can and do add to the problem? I'm sure they don't want to keep hauling up rubbish, and I'm sure they don't want to be seen as responsible for directly causing the unnecessary deaths of animals, so why do some of them seem so oblivious to the harm caused by their actions?

Incidents like these may be isolated, but they certainly do not indicate any hint of responsibility and awareness among anglers in Singapore. How blind can they be? I know of people who greedily keep every single fish they catch, even pathetically tiny juveniles. I've seen people leave unwanted fish to die on dry land. I've seen the litter left behind after these fishing trips.

It's not just carelessness, it's downright irresponsibility and stupidity.

I hate to make sweeping statements, and I know that there is a growing number of anglers who are concerned and trying to change the attitudes of their peers, but I do not see our local fishing community as being capable of becoming a major force for change in conservation of our waters. Which is a shame, because I know that fishing is a very popular hobby. Until the day comes when anglers clean up their act, and become more active and vocal in condemning such irresponsible and ecologically unsustainable practices, fishing will always be perceived as antithetical to the spirit of marine conservation.

The following posts contain more examples of how the thoughtless actions of some anglers can pose a serious threat to our marine life: