Should we care about Pulau Ubin? Seeking views and comments 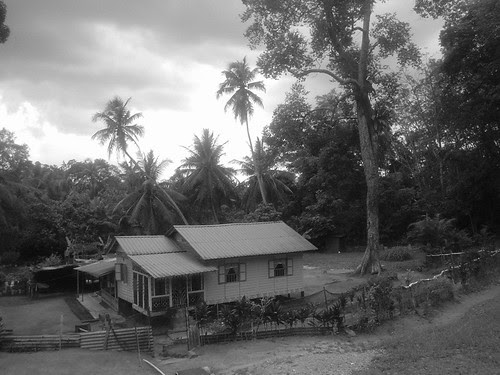 One of the houses at Kampung Melayu, Pulau Ubin;
(Photo by Pod Boy)

Yesterday's post on the planned eviction of some of the residents on Pulau Ubin received a lot of attention. I haven't been able to keep track of what others are saying about the whole matter, especially on Facebook and various online forums, but I'm glad to see that a number of people care about what happens to Pulau Ubin.

Of course, there are bound to be naysayers, people who don't see what's the big fuss about a few villagers. Why does it matter if Pulau Ubin is developed and the villagers resettled? After all, many from the older generations grew up in kampungs and benefited from the amenities provided by public housing apartments. Most Singaporeans now live, work, or play in locations that were most probably former kampungs that were razed to make way for progress. Why bother about these last few relics when you can get the same rustic experience across the causeway?

Priscilla Thechilipadi Chen
Only one phrase comes to mind: "do you have NO PRIDE??!!" Followed by a slap with a trout or rubber chicken.

Rene Ong
Yes I do... but I don't know how to put them in few words and say them nicely...

Melissa Lim
Think said person missed the point - it's *not* about where he/she can get a "kampung experience". (Where did that even come in?!)

It's about home - ours, as well as that of those to be evicted (man and animal alike). Would be nice if he/she grow up a tad and stop being so self-absorbed.

Debby Ng
Ubin was mined for development on the main island. several residents went there bcos of the mining business in the area. their village existence is a part of our heritage. the same reason we call ourselves "Singaporean" and not "Malaysian" or "Indonesian" despite having many cultural/language/geographical similarities, means this is our own unique heritage. The people on the island have lived, and continue to live, a Singaporean life and them being Singaporean is what connects us to the island. There are many rural village settlements to visit and explore throughout the region but none of them are like Ubin, with its flavor, design, culture and people.

Brandon Albert Lim
Malaysian kampungs, if you're lucky, might even come with an escaped Singaporean terrorist. How cool is that? Imagine being neighbours w Mas Selamat!

David Tan
The fundamental fallacy behind that question is the assumption that all kampungs are somehow the same. That visiting a kampung (or, to use the state's vocabulary - a squatter settlement) will afford the same sort of "experience" regardless of whether these kampungs exist in Malaysia, Indonesia or even Thailand. There are several things wrong with this sort of sentiment.

In the first place, by speaking of kampungs as nothing more than an 'experience', we are reducing the subtleties of the space, with all its human interactions and sociocultural contexts, into nothing more than a spectacle to be consumed by an audience. This sort of theme-parkification of history and culture is based on the assumption that these artefacts no longer hold any sort of currency or value in and of themselves in the present day beyond their ability to be marketed to a captive audience. In that vein, what a kampung actually is ceases to matter, and what becomes more important is that an experience of kampung-ness be presented to the consumer. Authenticity, historical accuracy, and cultural value are set aside in favour of a homogenised piece of theatre - a charade of fancy special effects that is ultimately meaningless and does injustice to the cultural relationships between kampungs and the societies within which they are embedded. Singapore is no stranger to this. In fact, it seems like we derive some sort of macabre pleasure in reducing artefacts of historical or cultural value into elaborately planned song-and-dance routines. From the redevelopment of Chinatown into some sort of garish Tang dynasty arena to the inexplicable 'volcanoland' attraction that used to exist on Sentosa (heck, the whole island of Sentosa is an homage to the crass disneylandification of culture) to the way we treat our forests and wooded areas, the commodification of heritage into a series of 'experiences' to be consumed is a product of a failure to recognise that these spaces have value in and of themselves, and the issue of Ubin's kampungs falls very much within this same sort of thinking. Who knows, we might soon have a 'kampungland' to celebrate all things kampung and make a mockery of what kampungs actually are.

What all this boils down to is our inability to see things beyond their value as units of economic productivity. By claiming that a Malaysian kampung is an equivalent substitute for a kampung on Pulau Ubin, the implication here is that the Ubin kampung is somehow redundant and can therefore be phased out since it is already replicating what the Malaysian kampung is doing. Economically speaking this makes plenty of sense, but this comes at the immense cost of ignoring the differences in context that distinguishes a Malaysian kampung from a Singaporean kampung. Scarily enough, this is also a parallel of the kind of discourse (I use this term very loosely here) over the conservation of our natural heritage. By looking at things (kampungs and forests alike) through an economic lens, we willfully ignore their intrinsic worth as objects and spaces that do more than just generate revenue for the state and imply that these spaces thus do no have a right to exist if they are not economically legible. This is why such an audacious question can even be mooted in the first place.

These are all interesting points of view, and I think it helps illustrate why the fate of a few villagers matters to us. Such arguments also inevitably creep into discussions about protecting what remains of Singapore's natural heritage. Is it even worth fighting over these small, fragmented, and degraded patches, when Peninsular Malaysia contains much larger swathes of similar habitats, and an even higher diversity of species?

Update: After the news about the planned eviction was reported in The Straits Times, many more people have expressed their thoughts on the issue.

Do you have something to share? Leave your thoughts in the comments! I'm personally waiting for an official reply from the relevant authorities before making any further comments on this matter.
Posted by Ivan at 11:45 PM