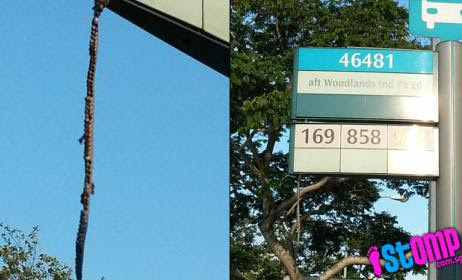 STOMPer Meshelle found a linear-shaped beehive hanging from a bus stop in Woodlands.

The bus stop is after Woodlands Industrial Park E6 and its number is "B46481".

"While waiting for the bus, I found a straight bee hive hanging from the bus stop.

"I have also informed the town council about this." 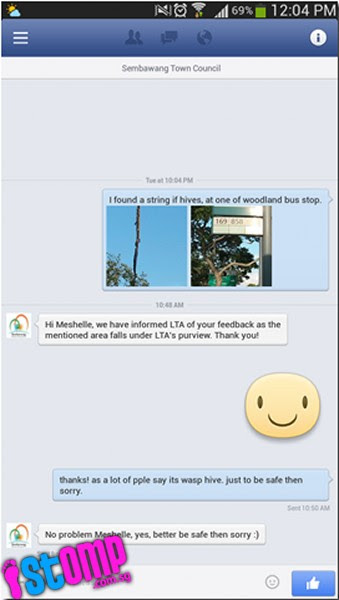 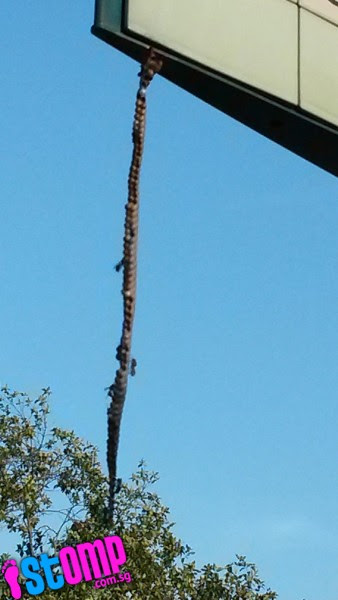 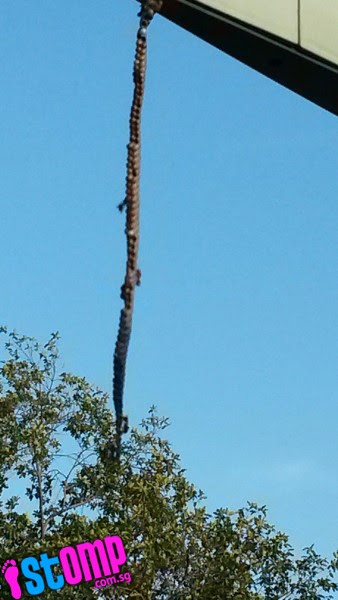 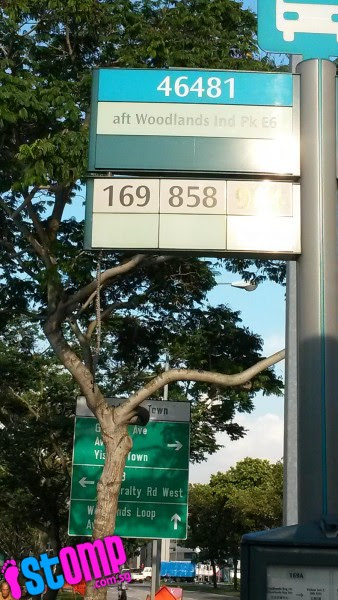 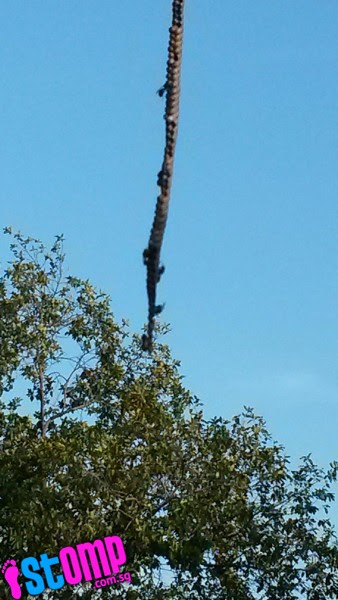 This is not a beehive, but the nest of a banded paper wasp (Ropalidia fasciata).

I wrote about these tiny wasps back in 2011, after an encounter I had with a similar nest at a former workplace. 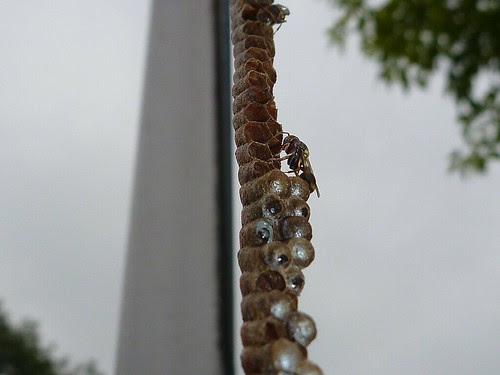 It's worth noting what I said back then about the risk of being attacked by these small wasps:


According to John Lee, who runs the Asian Hornet Net website, Ropalidia wasps do not present much of a threat when colonies are small; the adults are usually quick to flee when disturbed. However, once the colony is large enough, the wasps will defend their nest quite aggressively. Considering the small size of the adult wasps, the stings can be quite painful. This is a rare occurrence though, since they will attack only when physical contact is made with the colony, such as when people unknowingly brush against it or poke it out of curiosity. Indeed, the wasps were highly tolerant of my presence, even though I was quite close to the nest (though I was not touching it), and went about their business without harassing me.

(Where photos of other species of bees and wasps are featured in this post, I have also included John Lee's expert opinions on whether they can be potentially dangerous) 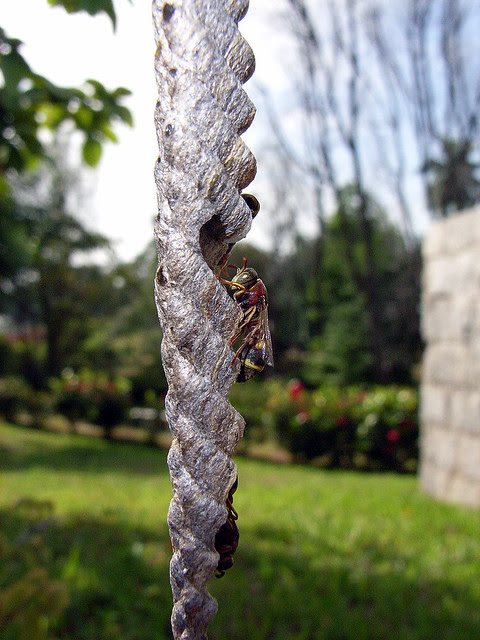 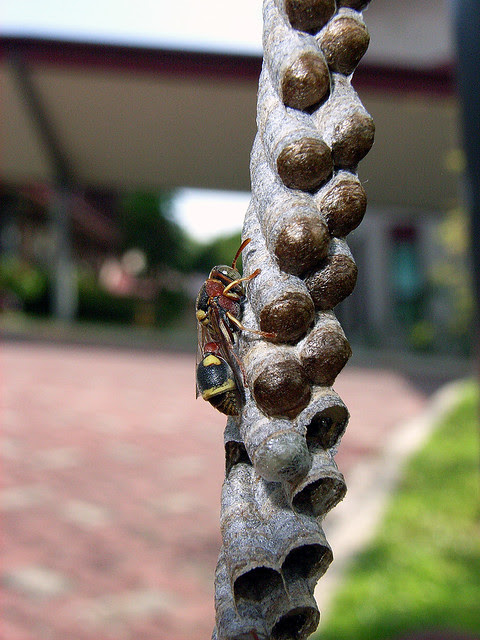 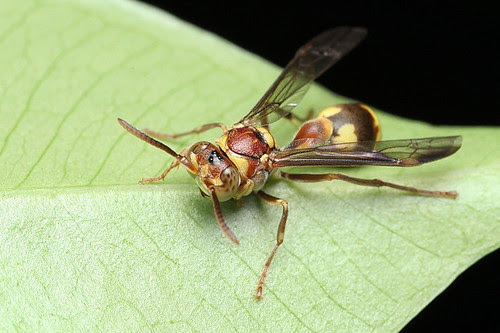 My friend Rene shared a series of photos documenting a colony of banded paper wasps in her balcony. Although the nest lasted for barely more than a month, it provided her with excellent opportunities to observe the behaviour of these social insects. 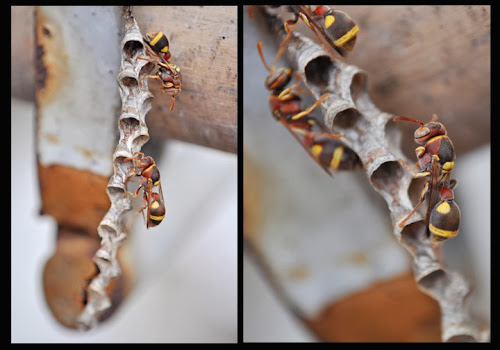 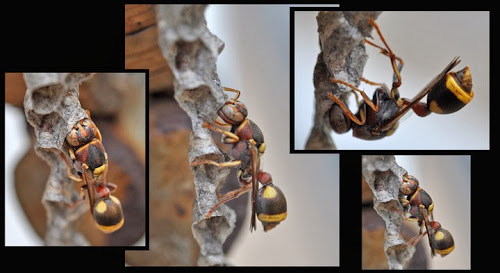 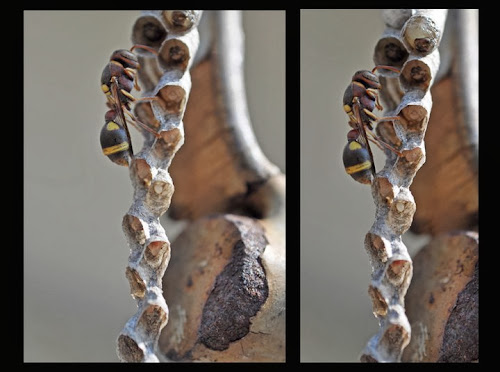 The perceived threat to public safety means that honeybee and hornet nests built close to areas with high human activity are usually destroyed, and such fear means that other more innocuous bees and wasp species may become collateral damage. On one hand, getting attacked by a swarm of honeybees or hornets can be potentially life-threatening, though an attack usually results from some form of provocation. Yet at the same time, these insects render valuable ecosystem services; hornets and other social wasps are skilled hunters of other insects, while bees and wasps visit flowers and play a vital role in pollination. 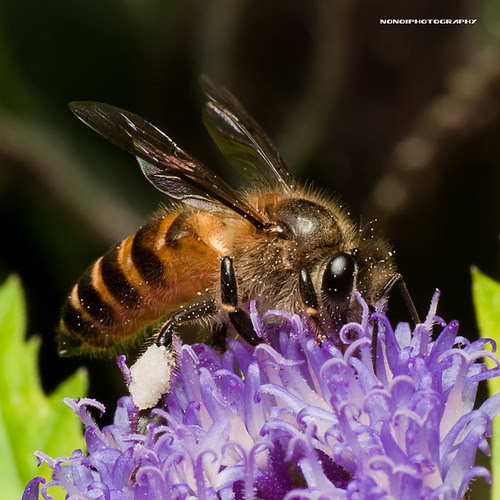 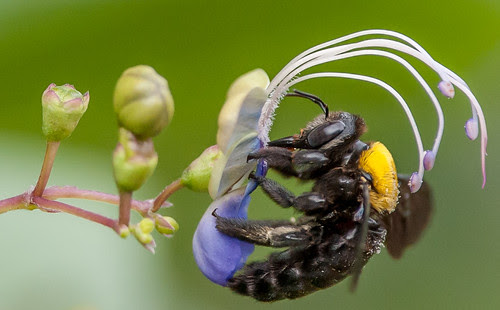 Lesser carpenter bee (Xylocopa aestuans), Singapore Botanic Gardens;
"Carpenter bees often cause fear in many, due to their large size, intimidating appearance and loud buzzing. However, they are completely harmless. A sting from one of these giant bees is a lot less painful than one would expect, although it does cause some swelling. Furthermore, these bees never attack, so the only way one may be accidentally stung would be to actually crush one or to unknowingly touch the entrance hole."
(Photo by Yew Chung) 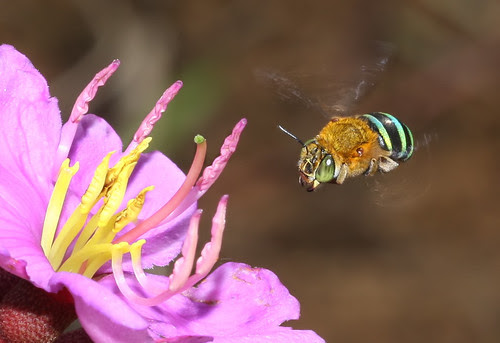 Blue-banded bee (Amegilla sp.), Chestnut Avenue;
"These bees pose virtually no threat to people. A sting from these bees feels like a mere pinprick and is extremely unlikely anyway. A neatly kept garden and well-maintained walls and brickwork will discourage them from nesting where people may contact them. It should be noted, however, that they should indeed be encouraged in gardens."
(Photo by kampang)

It's important to recognise that among the many species of bees and wasps present in Singapore, only a select few pose any potential serious danger to people, and usually only in situations when a nest has been disturbed. Even when hornet or honeybee nests have been detected, simply avoiding the immediate vicinity is typically enough to avoid provoking a defensive response. 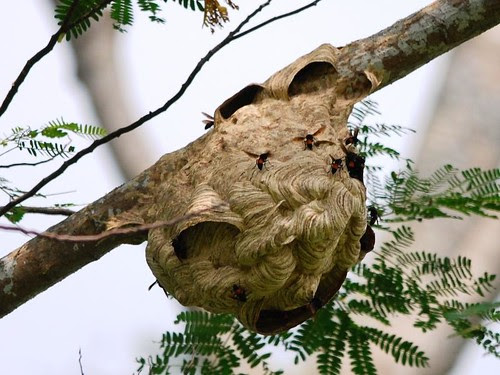 Nest of lesser banded hornet (Vespa affinis), Neo Tiew;
"In my experience, Vespa affinis is not particularly defensive near the nest, and it is in fact possible to approach and observe a nest at close range. However, large numbers of workers will swarm out and attack pugnaciously when the nest is disturbed."
(Photo by kokhuitan) 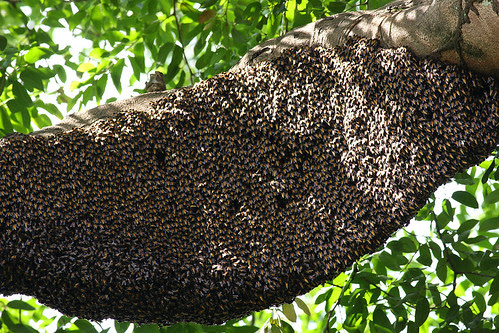 Nest of giant honeybee (Apis dorsata), Chinese Garden;
"The nests are usually very high in trees in Singapore; this is a good thing, for these are some of the most aggressive and dangerous stinging insects known. According to some, they are even more aggressive than the hornets and show much more persistence in pursuing intruders."
(Photo by kampang) 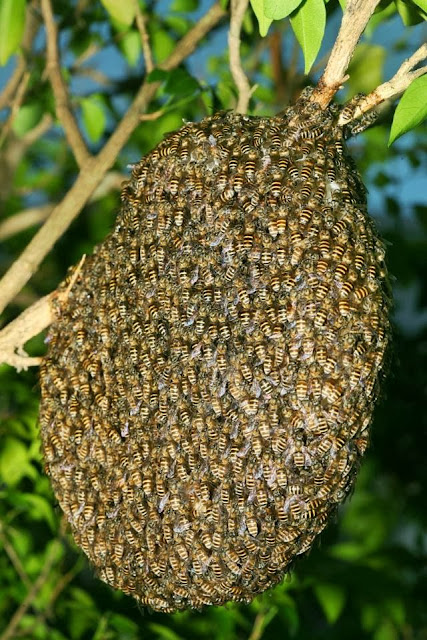 Nest of dwarf honeybee (Apis andreniformis), East Coast Road;
"Apis andreniformis is not particularly defensive; it is certainly less so than Apis cerana or Apis dorsata. In my experience, a nest will start "trembling" or "tremoring" in defense when approached to within 3 feet. This behaviour is present in many Asian honeybee species (Apis cerana, Apis dorsata and Apis andreniformis). The bees swing their bodies from side to side rapidly, sending waves throughout the swarm, and more and more bees follow suit; the whole nest thus appears to "shimmer" at regular intervals of one or two seconds. There is usually a little "tail" of bees at the bottom of the nest. When disturbed, this "tail" lengthens noticeably, and at the same time, a loose swarm starts forming at the top of the nest, near the attachment to the branch. All these bees will be involved in attacking if the intruder comes closer.

Once thoroughly alarmed, these bees will attack viciously in large swarms, although it is rare for them to be agitated to this extent. Nests of these bees still pose little danger to the public in general, unless a nest is located in a low bush where one could accidentally knock into. The sting of these bees is not really painful but produces a surprising amount of swelling. Their stings are short and cannot easily penetrate the average adult's skin (except for softer parts such as the underside of the forearm or the neck). They, too, leave their sting in the wound as common honeybees do, and so only sting once."
(Photo by Liana)

Urban parks and gardens represent important foraging areas for many hymenopteran species, and there is a possibility that forest-dependent bee species might venture into nearby parks to feed. It is likely that efforts to enhance urban greenery to attract butterflies have inadvertently benefited bees as well, and such spaces might turn out to be of some conservation value, especially where some of our more uncommon bee species are concerned. However, there is the problem of whether any bee and wasp colonies that become established in such areas will be allowed to persist, or whether they will be assumed to be dangerous and destroyed regardless of the actual risk. 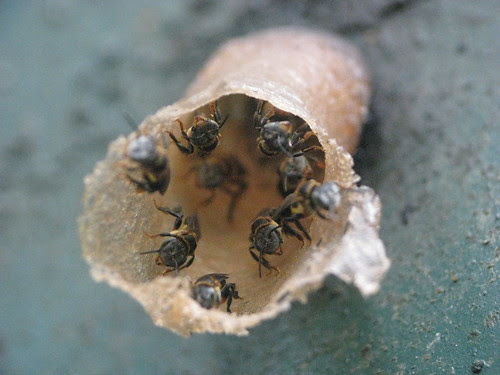 Nest of stingless bee (Trigona sp.), Pulau Ubin;
"Stingless bees do in fact have stings. It is just that their stings are too small and weak to penetrate human skin. However, some species ferociously defend their colonies by biting and even spraying certain chemicals which cause a painful burning sensation. However, they are not particularly defensive if the nest is left alone, and do not pose a threat in most cases."
(Photo by Siyang)

Urban beekeeping has become increasingly popular in recent years, although there has been some controversy as to whether cities like London have sufficient green areas with flowering plants to provide food for so many hives. Here in Singapore, where there is abundant urban vegetation and plenty of flowering plants to supply bees and other insects with nectar and pollen, perhaps it's worth exploring the possibility of allowing honeybees to set up colonies in sites where they are less likely to be disturbed by people or destroyed by pest control. 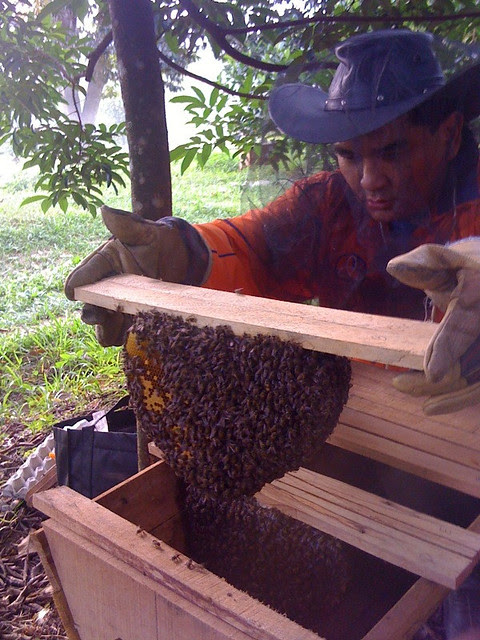