Pulau Ubin is often described as the last remnant of a Singapore that has all but vanished everywhere else, a place bypassed by the decades that feels as it must have done in colonial times.

Of course, this is largely a myth: the Ubin I now visit on a frequent basis is quite different from the Ubin I visited as a child in the 1990s. Change is constantly taking place on Ubin, even if we're not always immediately aware of it; familiar faces vanish, buildings change hands and exterior decor, and trees fall as a result of both storm and chainsaw.

But sometimes, there are signs of even greater upheaval lying in wait, hints of policies that some fear will destroy or irrevocably alter the Ubin that so many of us have grown to love and appreciate.

A few weeks back, one of the mailing lists I subscribe to had someone announce that residents of Kampung Melayu in Ubin were being served with notice of eviction, with a photo of one of these letters as proof: 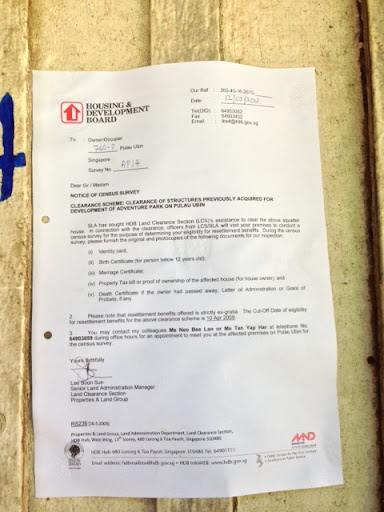 For those of you who might find the text a little small, this is what it says:

SLA has sought HDB Land Clearance Section (LCS)'s assistance to clear the above squatter house. In connection with the clearance, officers from LCS/SLA will visit your premises to conduct a census survey for the purpose of determining your eligibility for resettlement benefits. During the census survey, please furnish the original and photocopies of the following documents for our inspection.

(i) Identity card;
(ii) Birth Certificate (for person below 12 years old);
(iii) Marriage Certificate;
(iv) Property Tax bill or proof of ownership of the affected house (for house owner); and
(v) Death Certificate if the owner had passed away, Letter of Administration or Grant of Probate, if any.

You may contact my colleagues Ms Neo Bee Lan or Ms Tan Yap Har at telephone No. 64903059 during office hours for an appointment to meet you at the affected premises on Pulau Ubin for the census survey.

I wasn't quite sure what to make of this information, but eventually thought it was worth sharing, especially in light of a discussion that took place on Facebook. Perhaps others would be able to help in verifying this. I tweeted about the planned eviction on Tuesday evening, and it was soon picked up by other local users. Here are some of the responses I received.


It's apparent that many people have a negative view of the idea of resettling villagers on Ubin for the sake of development.

I managed to find a photo of the same letter that was sent to another resident, which strongly indicates that this was genuine, and that it's not just one house that's affected. 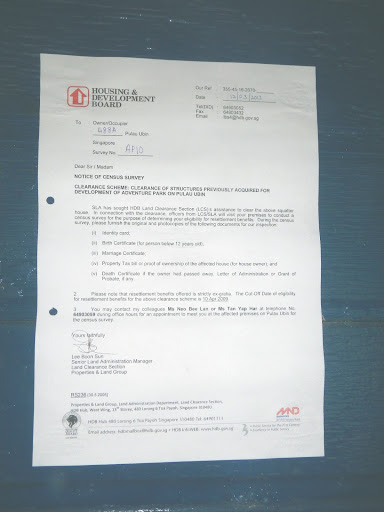 Edit: I've since learned that one of the affected residents is Kamariah, who often hosts events that allow urbanites to experience a slice of life in a Malay kampung. Many of these events are documented on this Facebook page.

Others who know some of the Ubin residents on a more familiar basis have confirmed that quite a few households have received the same notice of eviction. 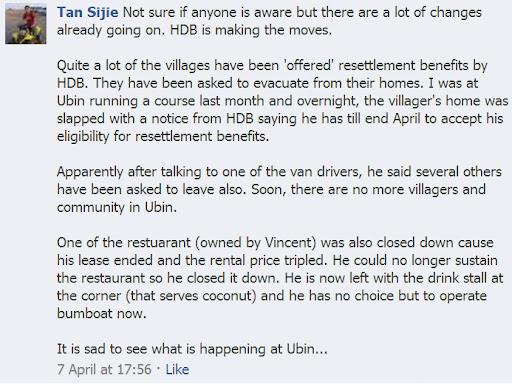 Comments taken from this thread on Ria's Facebook page.

According to proposed land use plans to support a projected population of up to 6.9 million people in Singapore by 2030, much of Ubin falls under the catch-all label of open space/recreation/agriculture, represented by the green patches in the map below. Other land parcels on the island have been set aside as reserve sites (light yellow), which means that they have been earmarked for future development, but will be left unused for the time being (please correct me if I am wrong). The map shows that parts of Ubin's eastern coastline, including Chek Jawa and Pulau Sekudu, will be reclaimed. Not to mention the road that will supposedly join mainland Singapore to Ubin and Tekong. 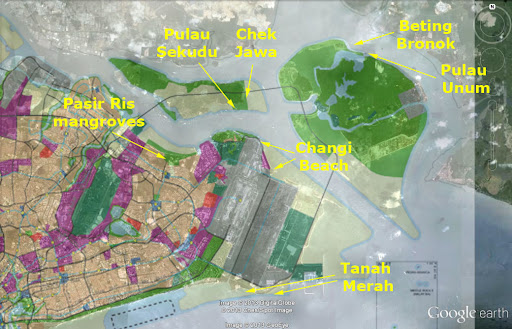 Proposed land use map overlaid with current Google Earth image of eastern Singapore, showing the locations of some shores known to be rich in marine life;
(Image from Ria)

Of course, 2030 is still quite a long way off, and these are meant for a worst case scenario. This current eviction of villagers may have little or nothing to do with such plans. But it's still disconcerting to think about what this could mean for the future of Ubin as a whole.

I acknowledge that depopulation isn't always bad. After all, resettlement, combined with the closing of the granite quarries and a decrease in the resident population, has possibly been beneficial for Ubin's wildlife, allowing the forest to reclaim areas once cleared and heavily influenced by human activities. However, it really depends a lot on the intended purpose of such an exercise, and what happens to the land after that, whether it is returned to the wild boar and red junglefowl, or converted into another commercial venture at odds with Ubin's image as a refuge from the stress of the concrete jungle.

What is this so-called Adventure Park all about? How much land will it cover? What will be constructed? When will construction begin? And is there some way to build the Park without affecting the villagers, say for example, by incorporating the villagers as part of the Park?

I hope that the relevant authorities that are overseeing this endeavour (which appear to be the Housing Development Board and Singapore Land Authority) will be able to provide us with an explanation, but in the meantime, it would be great if people with better knowledge than I do about future plans for Ubin, or who are familiar with the land acquisition process in Singapore, can offer some further clarification. Whether it's to allay our fears or confirm them, I think it's critical that other stakeholders get a clearer picture of what is happening. As non-residents, these schemes might not necessarily impact our daily lives, and we might not be able to do much about the forces that continue to change Ubin, but at the very least, I think we ought to know what exactly is going on, and if we are at risk of losing other cherished places.

UPDATE: For more views and comments, visit my latest post.
Posted by Ivan at 7:00 PM