Of moths and social media 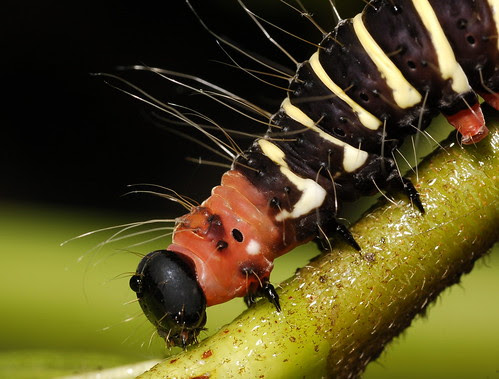 Much has been said about online social networks; tools such as blogs, instant messaging, Facebook, Twitter, and many other platforms have made it possible for people to establish channels for communication and share information very easily.

Recently, I saw firsthand the relevance of social media where it comes to natural history.

It all started more than 2 weeks ago, with a Twitter update by my girlfriend Christel, who saw several caterpillars in an area of the National University of Singapore (NUS).

She also uploaded a photo of one of the caterpillars, taken with her iPhone. 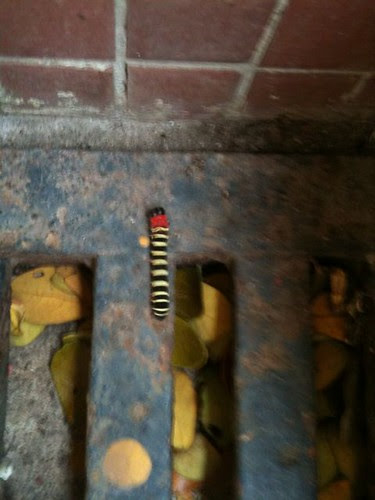 My knowledge of butterflies and moths is very poor. I decided to surf around the websites of Butterfly Circle and the Butterfly Interest Group, since they do have many photos of the caterpillar stage of many local species of butterfly.

I found this photo in the Caterpillar Gallery of the Butterfly Interest Group website. The description was "caterpillar feeding gregariously on ficus leaf - 20mm" 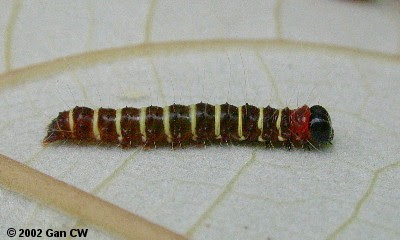 There was a close resemblance to the caterpillars Christel had spotted, but there wasn't any ID given. So I was still quite stuck where it came to identifying the moth species. 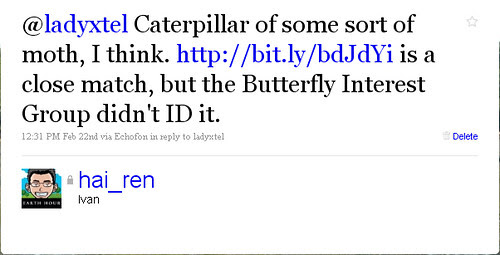 I posted an appeal on Twitter, using my other account, which is used more for nature and science-related updates. Or as my girlfriend likes to say, my "geek" stuff. 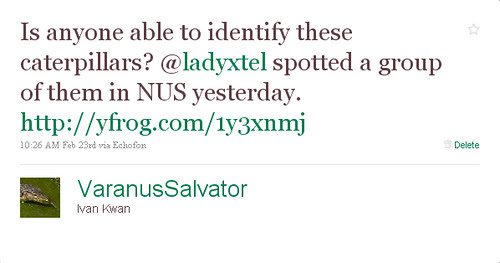 I got a response from my friend Gwynne, who had also seen them elsewhere in NUS: 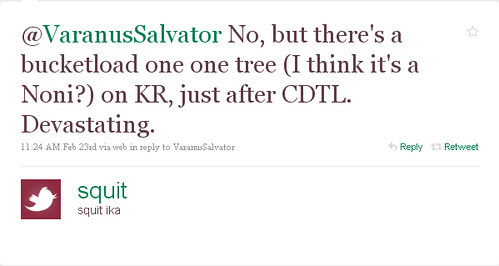 A while later, there was another update:

I was excited to find a blog post documenting these caterpillars, but was still not making any headway in identifying the species involved.

The caterpillars I was trying to identify are the same species as the ones on the right of this collage.
(Photo by lekowala)

My Google Buzz settings are such that updates from my VaranusSalvator Twitter account will show up on Buzz as well.

This led Siyang, who has a passion for moths (and who used to post on the Moth Mania blog), to reply with a possible ID.

Googling the name revealed that Asota plana supposedly belongs to the family Noctuidae, although the taxonomy of that family is currently a mess. According to The Moths of Borneo, "The host-plant was given as Ficus (Moraceae). Bell (MS) made similar observations on the southern Indian race, recording it from several Ficus species. The eggs are laid in batches and the larvae are gregarious". Siyang himself had posted about an encounter with the adult of this species in NUS before. 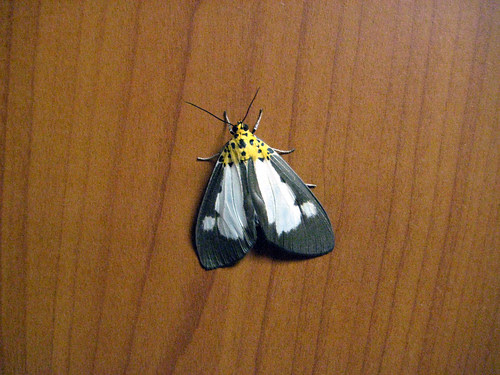 There is a mention of this species in this online publication by the Raffles Museum of Biodiversity Research , on the ecology of the Malayan banyan (Ficus microcarpa).


The caterpillar of the moth, Asota plana, eats the leaves of this and other fig species (W. F. Ang, pers. comm; Figs. 19, 20). Although trees may lose most of their foliage from one such attack, they usually recover once the caterpillars pupate and emerge as adults to attack other trees.

There are 2 photos of this species in the publication, 1 features the adult moth, the other shows a group of caterpillars feeding gregariously on the leaves of the Malayan banyan. 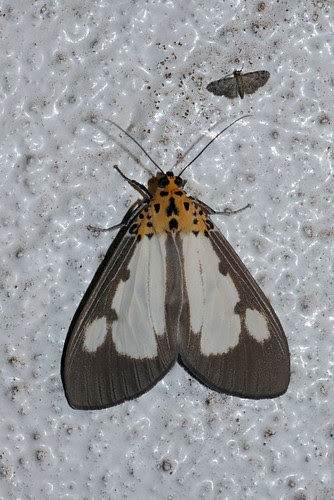 There are quite a number of excellent photos of this moth species on Flickr, most of which seem to have been taken in Taiwan. 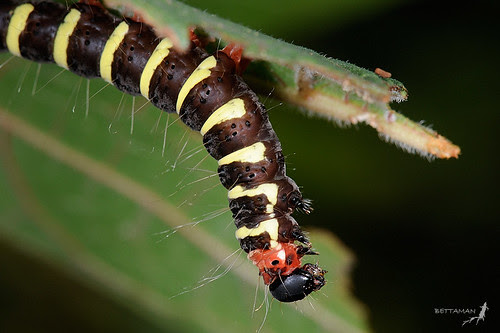 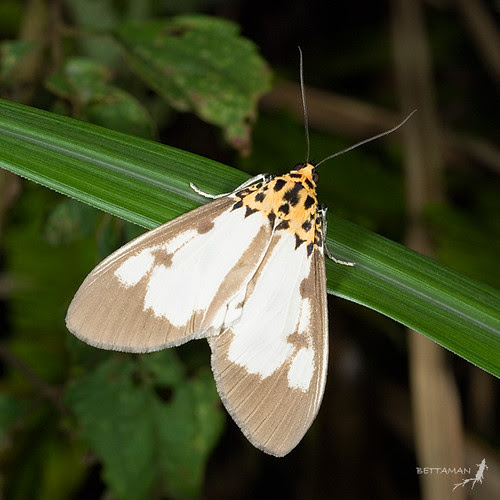 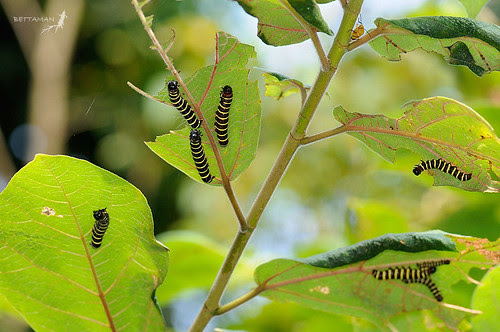 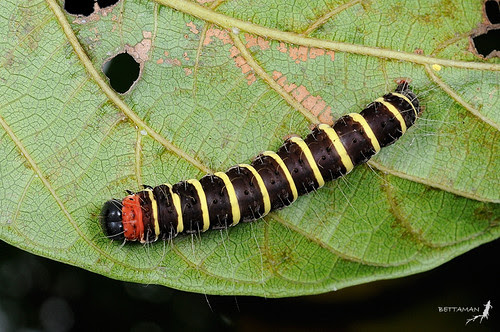 My girlfriend confirmed that these were the indeed the caterpillars that she saw.

I decided to thank Gwynne for trying to help me out:

Where it comes to insects, bright colours often mean that the insect is toxic in one way or another, deterring would-be predators. In the case of Gwynne's mantid, it seems that it was a very costly lesson.

I thought that was the end of it, until last Sunday, when Christel's friend Melissa, who was with her when the caterpillars were encountered, uploaded a couple of photos of the caterpillars on Facebook. I decided to ask for the original photos so that I could share them here. 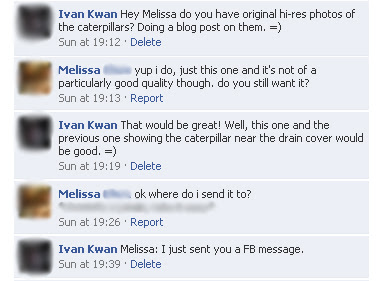 She subsequently sent me an email with the 2 photos attached. 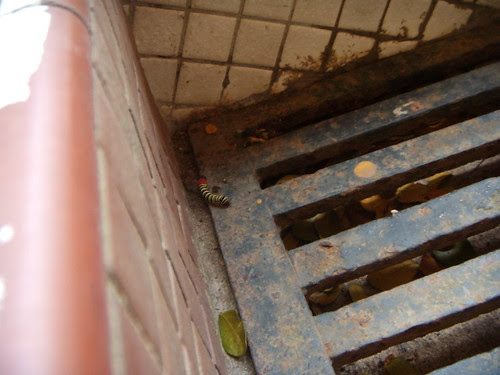 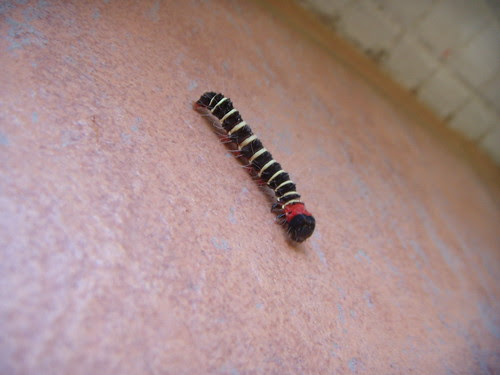 I've found it extremely fascinating to see just how this entire process has played out, from the very first sighting to the subsequent identification, and using online resources to find out more about the species and its place in the ecosystem. A simple encounter with a bunch of caterpillars triggered a series of interactions and communication with several people, sharing information and helping others uncover knowledge about our natural world.
Posted by Ivan at 12:00 AM