A new look for Monday Morgue One of the regular features of this blog has been my weekly Monday Morgue updates, featuring photos of a dead animal I encountered somewhere in Singapore, whether it's dead fish on a shore or a crushed snail in my neighbourhood. You may have noticed a lack of new Monday Morgue entries on this blog in recent months. That's because after a suggestion from some friends, I decided to move my Monday Morgue posts over to a blog specially dedicated to sharing photos of animal carcasses.

The migration to Tumblr

At first, I used Tumblr, which was very easy to use, and customisation of my theme, while not as straightforward as Blogger, required some trial and error. As someone who knows a fair bit of coding with HTML, and still very much a newbie where it comes to CSS, this was nonetheless quite a big achievement. Spurred on by this new direction that Monday Morgue was taking, I created and upload a neat little banner image, featuring several photos of dead animals I'd found over the years.

However, I soon discovered the biggest weakness of this platform: apparently, Tumblr does not have its own comment function. Users with Tumblr accounts can 'like' a post, or 'reblog' it (i.e. post the content to their own Tumblr sites and share it with their own readers), with the option of adding in their own comments. It does support the Disqus plug-in, which allows for people without Tumblr or Disqus accounts to comment as Guests. But I felt that it was an additional unnecessary step, and I definitely wasn't going to encourage people to sign up for a Tumblr account just so that they could comment on my posts. And so, sometime in June, I made the switch to Posterous. While I still haven't quite fully gotten the hang of editing the theme to suit my tastes (hence the current lack of a banner image in this version), I do like the current look and the fact that anyone can now leave comments on my posts. One major beef that I have though is that unlike Tumblr, which allows me to insert a Twitter widget into my sidebar, Posterous does not have an easy way for me to do the same. Ironically, Posterous positions itself as "the perfect compliment to Twitter."

There's a workaround, but I opted to just add a tab that simply links to my Twitter feed. Similarly, there are tabs that allow readers to access my main blog over here, as well as an RSS feed.

Like Tumblr, updating is very easy, not to mention that importing my posts from Tumblr was so hassle-free. I'll need to go back to my archives and tweak the code and tags here and there, but I'm generally satisfied enough to finally re-launch the new incarnation of Monday Morgue.

For the curious, here's a comparison between Tumblr and Posterous, with Posterous itself weighing in on the issue. 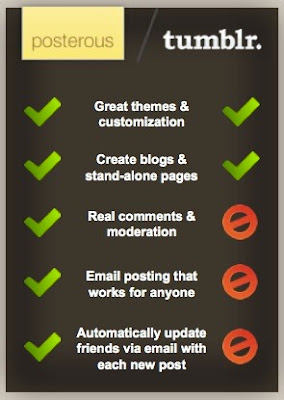 The new Monday Morgue - Now waiting for your contributions!

One added feature that I've decided to introduce is to allow contributions from readers. If you have photos of dead animals found in Singapore that you wish to feature on Monday Morgue, you can always send them to Terra.Incognita1982@gmail.com, with the following information:


The date you found the carcass

You can view photos of dead animals taken by some of my friends that I've used as examples. Slender Remora (Echeneis naucrates)
Terumbu Semakau, 5th June 2011
This remora was one of many fishes that had been trapped by a driftnet laid on Terumbu Semakau.
(Photo by Ria Tan) Jambu Fruit Dove (Ptilinopus jambu)
Singapore Botanic Gardens, 9th July 2010
This bird killed itself when it flew into a glass window and broke its neck.
(Photo by Jacqueline Lau) Estuarine Crocodile (Crocodylus porosus)
Kranji, 11th October 2008
This crocodile had been found with its jaws entangled by a fishing net.
(Photo by Marcus Ng)

It's been interesting to see how this little morbid fascination with poking random animal carcasses has evolved, first from a minor weekly feature to just about the only thing I ever posted when I was too busy to write proper blog posts, to an entire blog. In some ways, Monday Morgue has become my trademark of sorts, culminating in my recent presentation of dead wildlife I found along the KTM railway tracks, and people remembering me because of that presentation.

So do remember to update your bookmarks and links, RSS feed, and all that if you want your weekly dose of dead animals found around Singapore. Can't wait to see what submissions I'll receive from other folks for Monday Morgue!
Posted by Ivan at 2:00 PM